Visual Object Tracking, or tracking for short, is a fundamental component of autonomous vision systems. It allows machines to follow regions of interest through a series of images.

Many modern trackers prioritize speed and accuracy at the expense of robustness. 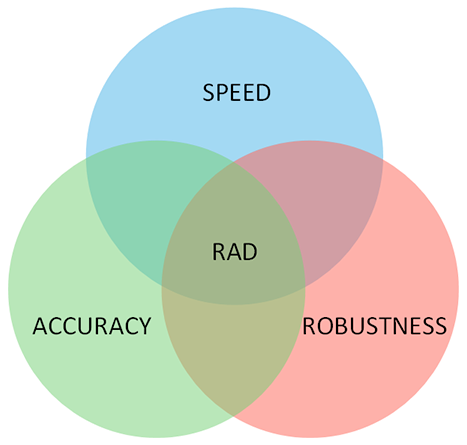 At Teleidoscope, we’ve developed our own tracker (RAD) that attempts to address all three.

Note: Performance in video above is impacted by visualization view rendering. See videos below for more accurate representation.

The impact one attribute has on the others varies by implementation but in general the following is often true.

It makes sense that speed and accuracy are prioritized considering that’s what trackers are usually supplementing. But it doesn’t explain why robustness is hurt in the process.

The impact to robustness lies in how trackers determine whether or not they’re still tracking an object. Most trackers take a pass/fail approach and compare a confidence score to some fixed threshold to determine if their object is tracked (pass) or lost (failed).

The latter is usually chosen because it allows a wider variety of objects to be tracked accurately with this approach. However, this assumption can cause issues in unexpected ways, as demonstrated below.

Speed and Accuracy and Robustness

In the video above, the combination of rapid scaling and background perspective change resulted in CSRT scaling incorrectly and not realizing it had drifted.

Many autonomous systems (e.g drones) rely on correct status reporting to determine if they need to perform more computationally expensive recovery tasks such as detection. If the tracker fails to often (high threshold), resources are wasted and if it doesn’t detect true failures (low threshold), drifting occurs. The latter can have severe affects on autonomous systems because they won’t know anything is wrong.

This make it clear that robustness is equally important as speed and accuracy. This of course makes the task of balancing a tracker very difficult.

This is where Teleidoscope’s RAD (Relocalizable Adaptive Discriminative) Tracker comes in.

RAD auto-calibrates to each object instead of using fixed implementation specific thresholds allowing it to report when tracking becomes unstable and recover itself when it does.

This allows RAD to track and recover, even in situations where there is very little scene detail.

The RAD tracker is at the core of Teleidoscope’s visual tracking framework which was designed with these issues in mind. Recovery and self-diagnostics are just some of the features that set RAD apart. Designation options for RAD can be seen in the below diagram and will be covered in a future post.

For more information, please reach out to contact@teleidoscope.com.